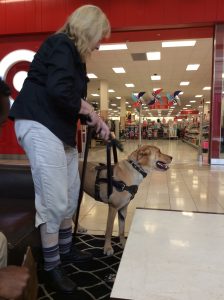 Becoming a certified dog and handler takes work…but it’s worth the reward.

Independence means different things to different people. For Carol Stoveken, who suffers from post-polio syndrome, it means trusting in a mixed breed rescue dog named Hendrix. Carol, a Connecticut native who transplanted to San Diego due to her disability, is among the estimated 53 million disabled Americans. In the United States, one out of every five adults has a disability, according to a new study published by the Centers for Disease Control and Prevention. The most common functional disability type was a mobility limitation – defined as serious difficulty walking or climbing stairs.

So, when Carol moved to San Diego’s downtown area some fifteen years ago, she quickly found that she would need the help of a service dog to help with her daily routine and to act as a protector. She had great success with her first service dog, a German shepherd named Barry. Hendrix, like Barry, was service-dog trained by DogMan Mark Castillero, owner of Pro-Train Innovative Dog Training in Vista, California. 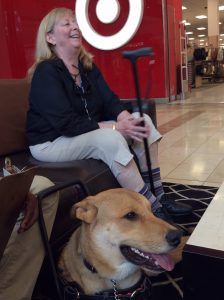 Hendrix and Carol at the local mall getting ready to pass round two of the exam.

This past Independence Day Weekend, while a majority of Americans were gearing up for a weekend of summer BBQ’s and trips to the beach, Carol and the staff at Pro-Train were at the local mall proving that Hendrix is certified as an official service dog. From simple things like helping grab a shopping cart to riding in the glass elevator, Carol and Hendrix worked hard to pass their final exam with flying colors. And, after roughly two hours of testing, both Carol and her beloved canine had successfully completed the requirements of a certified dog and handler.

“When we found Hendrix at a local shelter, he didn’t respond to a name or any commands,” says Carol. “He’s come a long way in a relatively short time.” Hendrix is approximately 1 year old and was trained for four months as a service dog specifically for Carol by Castillero and his Crew at Pro-Train. “My first dog, Barry, passed at the end of last year and I was heartbroken. But I knew I needed another helper and I knew who to contact.” 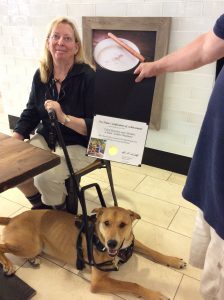 They passed the exam with flying colors. 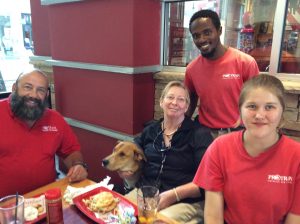 The Pro-Train Crew says Congratulations to Carol and Hendrix!

Animal Specialist and Behaviorist, Mark Castillero of Pro-Train Innovative Dog Training has trained over 9,000 dogs in his 40-year career. His center specializes in service dog training and will custom-tailor the training specific to the individual. A California State Licensed Guide Dog Instructor, Castillero offers a lifetime guarantee and allows for service dogs to have “brush-up” skills training and recertification of service dogs as required by local and state law.

In fact, on that hot summer day last week, Devora Exline a Navy veteran was having her dog Daffy, an 8 year old golden retriever recertified by the Pro-Train Crew. Devora, who spent 25 years in the Navy and served overseas in Kuwait, suffers from PTSD and other medical issues. Daffy was trained specifically for her Devora’s disability.

“Working with Mark has been a learning experience. Despite his rough exterior, he’s a big teddy bear whose only aspiration is that your working animal does the things that your animal needs for you to do,” said Devora. “I wouldn’t be golfing or surfing or attending my high school reunion had it not been for Pro-Train. I’ve been given me my life back,” she exclaimed.

Do you know of a disabled person who could benefit from a service dog? Pro-Train is a trusted partner of Red Basket, an online fundraising platform that seeks to fully fund individuals with great needs like Carol and Devora. Mark and his team will help the client launch a fundraising campaign, including writing the backstory and including photos.

For more information on service dog training, contact Pro-Train at protraindog@gmail.com or call Mark directly on his cell at 760-809-9148.

About the Author: bwi