There are approximately 390,000 service dogs across the United States. These dogs are trained to help save the lives of their owners as well as other people around them. Just like our local firefighters, law enforcement, and military members, these dogs are national heroes. They go through extensive training and practice to become the legends they are today, and with the right training, your dog can join the ranks. So, sit down with your pup and read about some inspirational dogs and the training that saved lives.

Roselle, the 9/11 Hero, and the Forward Command

On the morning of September 11, 2001, Michael Hingson, a blind computer sales manager, was sitting in his office on the 78th floor of the World Trade Center’s North Tower with his dog, Roselle at his side. At 8:46 am, he heard a loud booming sound that shook the building and created large eruptions of screams. Michael told Roselle the command “Forward” and Roselle immediately led Michael outside of his office and down the stairs. In the staircase, there was a woman who was screaming about how they wouldn’t make it, so Roselle nudged her and calmed her down. Together, the three of them made it out alive.

Roselle was an inspiration to everyone, and even became the “spokes-dog” for the Guide Dogs for the Blind organization. However, her training started with a simple command: Forward. To teach your dog this life-saving command, you will start by having him sit. Then, take a treat and place it in front of him while saying forward. This will get him to move towards the treat and in essence, complete the forward command. You can do this motion multiple times until your pup is able to move forward without you in front of him or her. 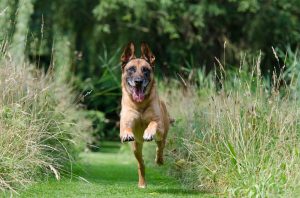 One cold winter night, Eve and Norman Fertig, founders of the Enchanted Forest Wildlife Sanctuary, went outside to check on the blustery weather. However, while outside, several trees fell, and they became trapped in an alley between two buildings. They couldn’t climb out and spent two and half hours huddled in the snow. Eventually, their dog, Shana came to the rescue and began digging her owners out of the snow. It took 2 hours for the dog to get them out, but she eventually cleared a tunnel about 20 feet long and saved the Fertigs.

If you’re stuck in a similar situation, it is important that your dog knows the command “dig”. You can do this by hiding one of Fido’s favorite treats or toys in the ground. You should lightly cover it so that the dog can still see his prize. Then, tell him to dig. Pair good behavior with treats and reward your dog when he completes the command. Eventually, with enough practice, you can start to bury the toy deeper. This isn’t just a great command for life-saving skills, but it’s also a fun game to play with your dog. You can hide his favorite items and see how long it takes for him to find them. Videotape them and upload them to Instagram, so that he can become a media sensation! NOTE: Typically, a common pet dog would not be taught how to Dig. Most that come to Pro-Train are taught how NOT TO DIG. But in an emergency situation, it’s a good thing to be so bonded with your dog, that he is willing to risk his life to dig you out of trouble.

One day, Judith Shaw, who suffers from glaucoma, blacked out on the floor. Lucky for her, Judith’s dog Louie was trained to save her life. Louie immediately pressed a panic button and started barking into the intercom. This button went directly to care services and an ambulance was immediately dispatched to save Judith. Louie saved his best friend’s life and was awarded an animal bravery award.

This trick is great for anyone that is prone to falling or living alone. You will need a panic button, or some sort of device that connects to medical services and you will need to train your dog to bark on command. To do this, find a treat or toy that gets your pup excited. You can also try ringing the doorbell or knocking on the door if the toys don’t work. Then, say “bark” or “speak” and get your dog to bark using the method that you chose. As soon as Fido speaks, you should reward him with a treat.

There are many dogs out there that have done heroic acts and saved lives. However, your dog is just as much of a hero as them. Train them well and one day, they could save your life.

Need a trainer for your specific disability or situation? Pro-Train has trained over 10,000 dogs. We can help! Email us for more information at protraindog@gmail.com

About the Author: bwi